December 21, the Restos Du Coeur of Belgium and the Federation celebrate 35 years of their field actions in Belgium.

In October, inauguration of the new 800 m² storage shed.

In July, inauguration of the foodtruck (Resto du Coeur mobile) which goes every week on Wednesday to Bouillon and Friday to Hastière to help more than 300 precarious people by delivering food packages to them. 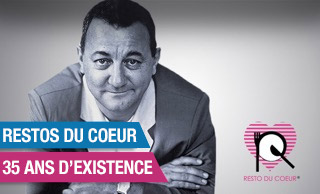 In order to meet the needs generated by increased precariousness, the FRCB (Federation of the Resto du Cœur Belgium) agrees to the creation of two new food points.

The Federation becomes a National Federation with the opening of Resto du Cœur in Flanders.

Creation of the Federation. The existing Resto du Cœur team up to form a Federation of Belgian Resto du Cœur. Over the years, Brussels, Liège, Mouscron, Mons and Wavre are joined by other food points which will open their doors in various towns and cities in Wallonia.

In France, the “Loi Coluche” is voted: a tax provision allowing tax relief for donations made to charities that provide food, health care or housing to people in need.
In Belgium, a similar law is introduced in 1992.

Coluche lands in Bierset and officially offers his support to all Belgian Resto du Cœur. He takes part in the concert at the Hall des Foires de Coronmeuse in Liège.

Coluche speaks at the European Parliament in Strasburg. Following this speech, the European Council opens the surplus fridges of the European Community in 1987, i.e. the European Food Aid Programme for the most deprived, (PEAD in French, then later renamed FEAD) and better known in Belgium as “Birb”.

Solvay: Coluche’s idea of the Resto du Cœur is immediately taken up by the students from the Business School. They start organising things in terms of management, centralisation and coordination in Belgium. They get in touch with food businesses, transport companies, etc. from several countries, as well as with private individuals who have some spare time or equipment they could lend. This wave of solidarity spreads throughout Brussels, then reaches Wavre, Liège, Mons and Charleroi.

Coluche’s idea: live on Europe 1, Coluche rants against the waste generated by our consumerist society. He also denounces the waste of agricultural surpluses in France and in Europe. “When there’s an excess of grub and it gets destroyed to maintain market prices, we should instead use it to create a large canteen that would feed all those who are hungry.”
The idea has been planted… The first Resto du Cœur opens in Belgium on 21 December 1985.

At the European Parliament: MP José Happart addresses the Parliament and condemns the economic situation responsible for the suffering of millions of people. “It’s unacceptable that the cost of health care and social security charges caused by poverty should be higher than that of food support provided to the people concerned.” Hence he asks for those surpluses, stored then destroyed at a high price, to be made available to those who need it.

The Resto du Coeur in Belgium